So, I am sure that it is not just me that has a problem getting their child to eat vegetables. I used to think that it was a matter of parents not introducing vegetables early enough and not requiring them to be tasted. I am not sure if there is some influence in some other sphere that causes my son to think he should not try vegetables but my 3 year old declares that he doesn't like them (and then as kids like to do he contradicts himself and says he likes this or that vegetable for that day).

He has both been introduced early on and is required to eat at least a little bit each day. My husband heard a theory that our taste buds, when young, respond very negatively to bitter tastes as a means of protecting us from harmful substances. So, when children taste vegetables they react instinctively. I get that. Maybe that is part of it.

I have had some success by explaining that it is healthy for him to eat vegetables and by not allowing him to say that he does not like them until he has eaten some of what is on his plate. However, he still doesn't love them so I have to get them in any way I can and I have found popsicles to be an amazing resource. I would also like to note that he is aware that there are vegetables in his popsicle but he still loves them and I think that is an important step.

Through experimenting I have found ways to make a variety of colors. Kale and Spinach are virtually undetectable when paired with Banana and apple juice, I promise. I was a skeptic until I tried it. Now I regularly make banana spinach smoothies. So, green smoothies were my first experiment, but, then, my son wanted some orange popsicles and I knew the green juice would overwhelm any other color, what should I do? Carrots are sweet and orange, Squash is so mild-bam, orange popsicles! Then my son wanted red popsicles. I decided to go with a beet. It was risky but they have so much benefit nutritionally and, also, they don't have to be juiced because they aren't leafy so they puree perfectly. NOTE: I don't cook any of the vegetables, you don't have to and you get way more nutrition.  Guess what? Success!

My advice? Just don't try to go too far, sneaking in as much as you can, and pushing the veggie limit because then they will be unpalatable and you will not have won any battle. Not only do these get much needed nutrition in but he views them as a treat and soon maybe he will view a platter of veggies the same way. 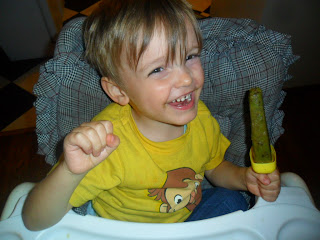 Red Popsicle (8 popsicles or 6 and a smoothie for yourself)