The idea of eternity scares me and I wonder if it is because I cannot wrap my head around it. Sometimes I wonder if those who are excited about it think of "forever" as the common meaning it has morphed into "a really long time." But it never ends. Even as something good it scares me. I feel guilty that I find it frightening, but I do all the same.
Posted by EmilysWindowSeat at 12:40 PM No comments:

So, I am 34 now and I realize that some roles just aren't going to be offered to me. A wish to audition for a particular role might not even be granted. This was true for the role of  "Anybody's" in West Side Story.

Why did I want to audition for Anybody's? On some levels I really identify with her. Any really great character should have some sort of universal appeal-she wants to be accepted, "anybody" can identify with that. But I have other things in common with her. Therefore, she also has personal appeal.


As a young girl, I loved baseball (still do), I collected Nolan Ryan memorabilia, I had a skateboard (now I have a longboard). I was always ready for action (side note that made me laugh: in West Side Story Anybody's has a crush on the character Action.) Did you want to play Wall Ball? Let's go. You want to start up a rag tag game of baseball? I'm there. You said I can't do WHAT because I'm a girl?! Believe me, that's the next thing I am doing...and better than you. I've broken a couple of windows  playing catch, I sprained my ankle swinging off rafters in an unfinished wing in my church. I would skin my knee, arm, elbow badly and jump up in case I missed something. Am I hurt? I don't know. Who cares and who scored?
Mud? There. Flooded streets? I'm there. Push up contest? There. Oooh, a tree! A wall with chinks? I could totally climb that! Where's Emily? She's up in that tree.

All that was purely me. But I also had this idea that to be the best I had to be like a guy. Even though I liked dressing up, for a while I tried to convince myself and others that I didn't.  My mom had to remind me not to get grass stains on my dresses, but I did like it. I also thought that if someone said I did something as well as a guy it was a great compliment.

That's the thing, Anybody's wants to be a guy because that is the best place she fits in and because when she hears praise from one of them, she thinks it is the ultimate compliment. Being a lady then and even now doesn't equal much glory. Unless you are pretty and you glory in being valued for that.

I understand her. I also understand that when you get to a certain age, both guys and girls sort of reject you for being that way. Girls crinkle their noses and call you "An American tragedy" (-Graziella, West Side Story) Guys kind of start ignoring you if you try to get in on a game. I remember the first time that happened. We were all 12. It was a game of keep away in a pool. All the girls watched from the sideline. I tried to play and no one threw to me. I tried to call out to make sure they knew I was in, but they didn't even acknowledge me, expect for once when I got a look that basically said: "Beat it. Your're a girl, be a girl."(-Tony, West Side Story) To some extent, I still get looks and guffaws, sideways glances, or chuckles if I display some sort of quality that is too "masculine." When I throw a baseball, a lot of guys look on in admiration and say: "You don't throw like a girl." When I was young, that made me soar to highest heights. Now, I reply: "I know. I throw like a woman." I  learned as I grew older that "tomboy" was a compliment (and cute) when you were young and then it was unsuitable as you grew older. It's okay to say you WERE a tomboy but not that you are.

That brings me to the word "tomboy" which I loathe. I loathe it because it labels a person as something naturally different than they are and puts value on what they are not. "Boy" is at the end of that word, but the person being spoken of is female.When someone calls a girl a tomboy, they don't see her. I am Emily, I am not a tomboy. I don't like "boy things."

A few years ago, I was painting faces for a school event. One of the little girls wanted me to paint a spider on her face because she liked "boy things." Even when I said to her: "No, you like Lillian things!" she was insistent that she did like boy things and I could see me in her so clearly.  When I was called a tomboy as a young girl I wore it like a badge, it gave me the idea that "boy" was better.  Sure, there are differences between men and women. However, I think those differences are more difficult to pinpoint than some people's statements lead you to believe.  I think there is a lot of fluctuation.  Thank God, because life would be a bore otherwise.

I try so hard to shut my mouth when someone says: "The other day my kid did this or that...blah blah" and someone else says: "Oh, that's a boy for you." Way too many times I have countered with: "I guess. Except when I was a little girl..." Nobody really wants to hear it. They just want to divide and make things easier.

For all you people who are anybody's. I understand. And, I'm sorry to break it to you, but people are going to laugh at you all your life. They are going to exclude you from things you would like to join. But be yourself, scabby knees and all. It's way better than not being yourself.

Just make sure you are hanging out with the type of people who accept you and who also aren't doing stupid things like starting fights and planning rumbles.

Posted by EmilysWindowSeat at 3:31 PM No comments:

The Beauty of Age 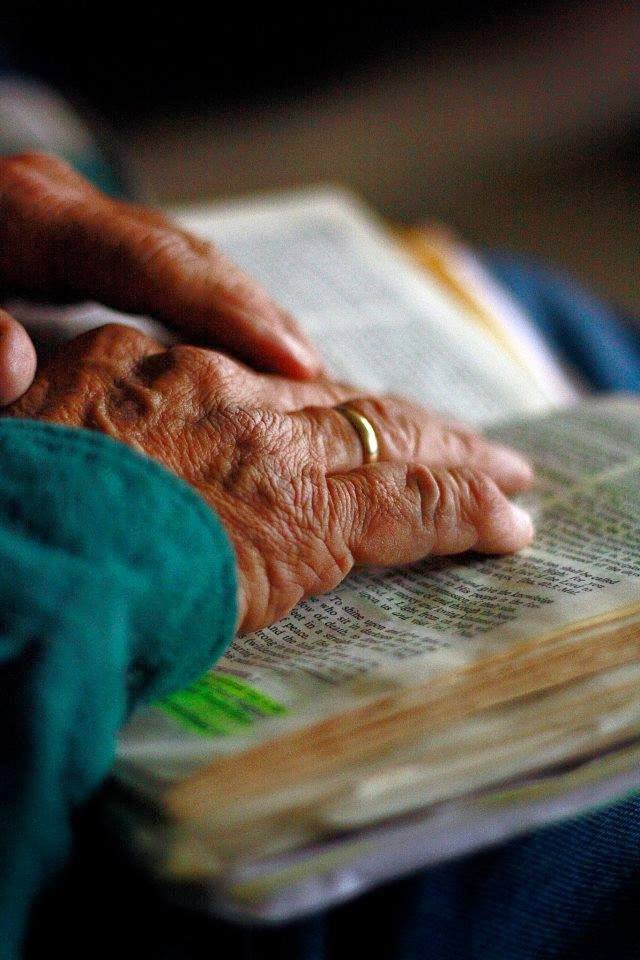 I look at you sitting there
Beauty in the grayness of your hair
Deep roads of wisdom line your face
And carved, etched around your lips
Where words fall with grace.

In wonderment I sit
And watch your hands as they flit
In them I see meaning, accomplishment, peace
Resting now, no shifting
And the sweetness of release.

And hope in this cruel, grasping world
All that I have laid down
Will lead me to one day bask
In the splendor of age
And wear time like a crown.

Posted by EmilysWindowSeat at 12:15 PM No comments:

What I Wore- New Year's Day

So, this post is kind of late in coming seeing as it was New Year's Day that I took these and it is nearing the end of January, but whatever.

New Year's Eve we went to a beautiful wedding, dressed up, and danced all night. Because my parents had our boys that means that New Years Day we slept in, dressed down, and then went out for lunch.

We went to Barnaby's which is a cute cafe on West Gray and Taft here in Houston. 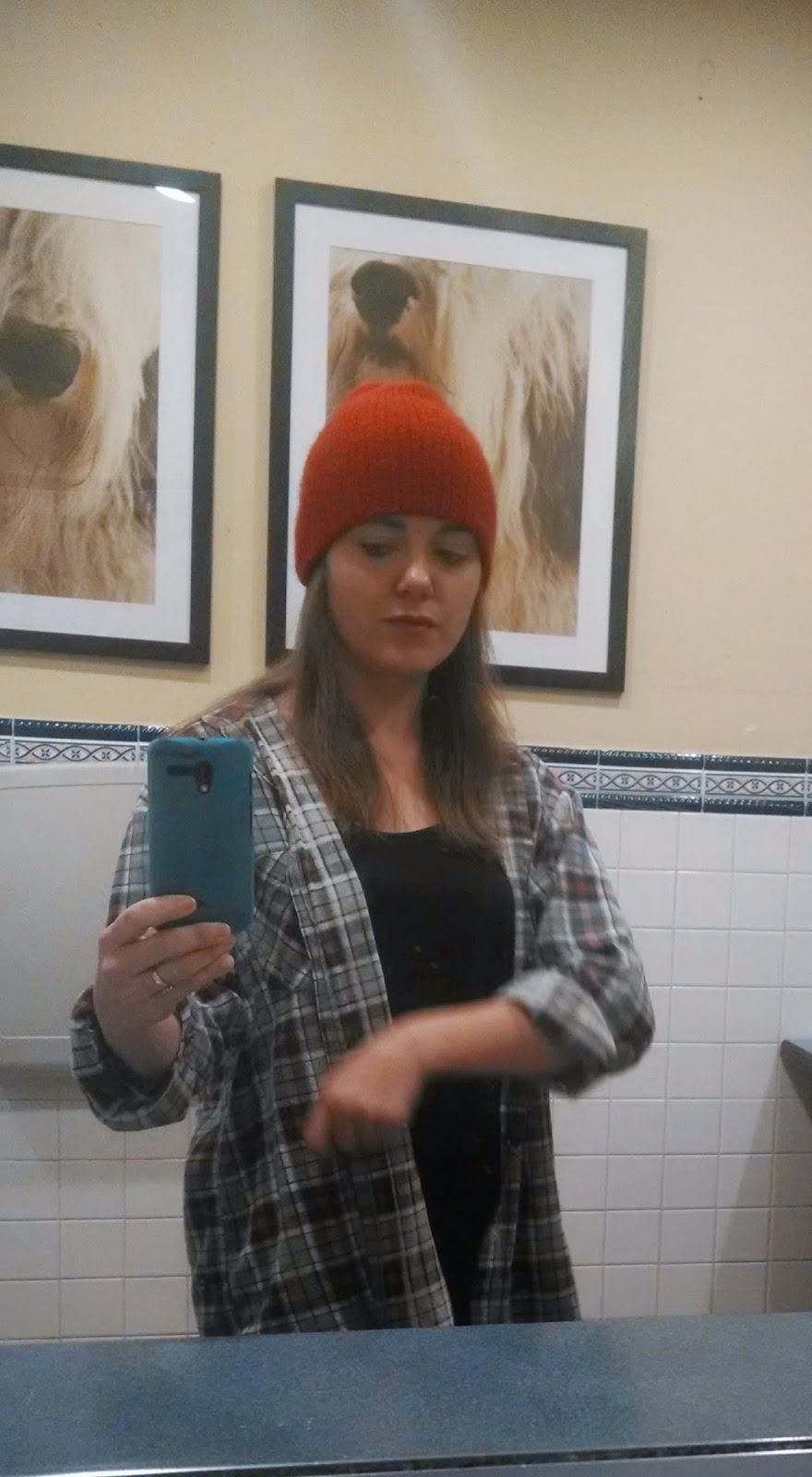 I am a horrible selfie taker.
By the way, spell check does not recognize "selfie."
It would like me to substitute "selfish" or self." 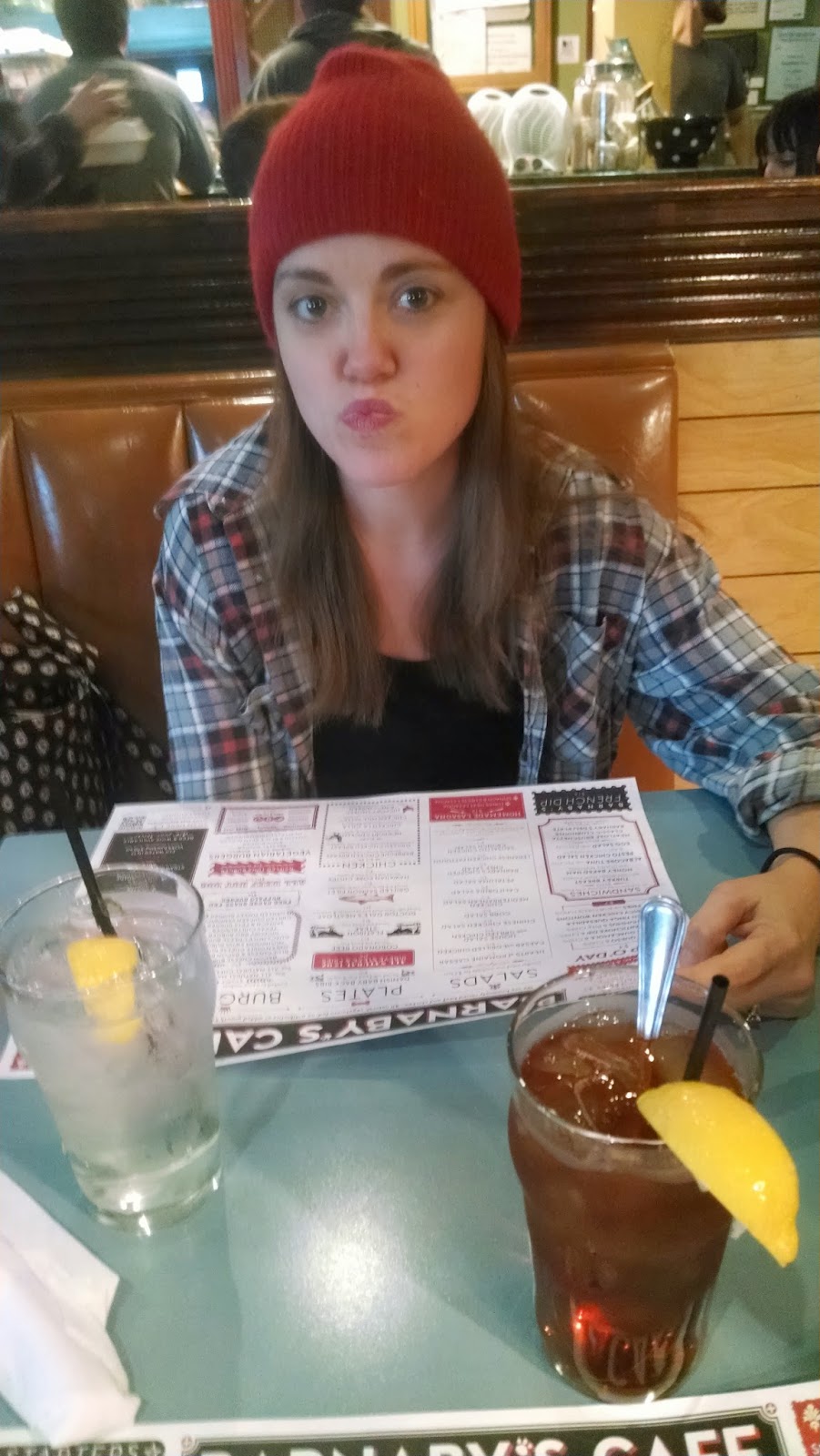 Husband takes picture and gets me mid "checking- my- teeth- before- picture- tongue- swipe." Battery on phone is low so no more takes. 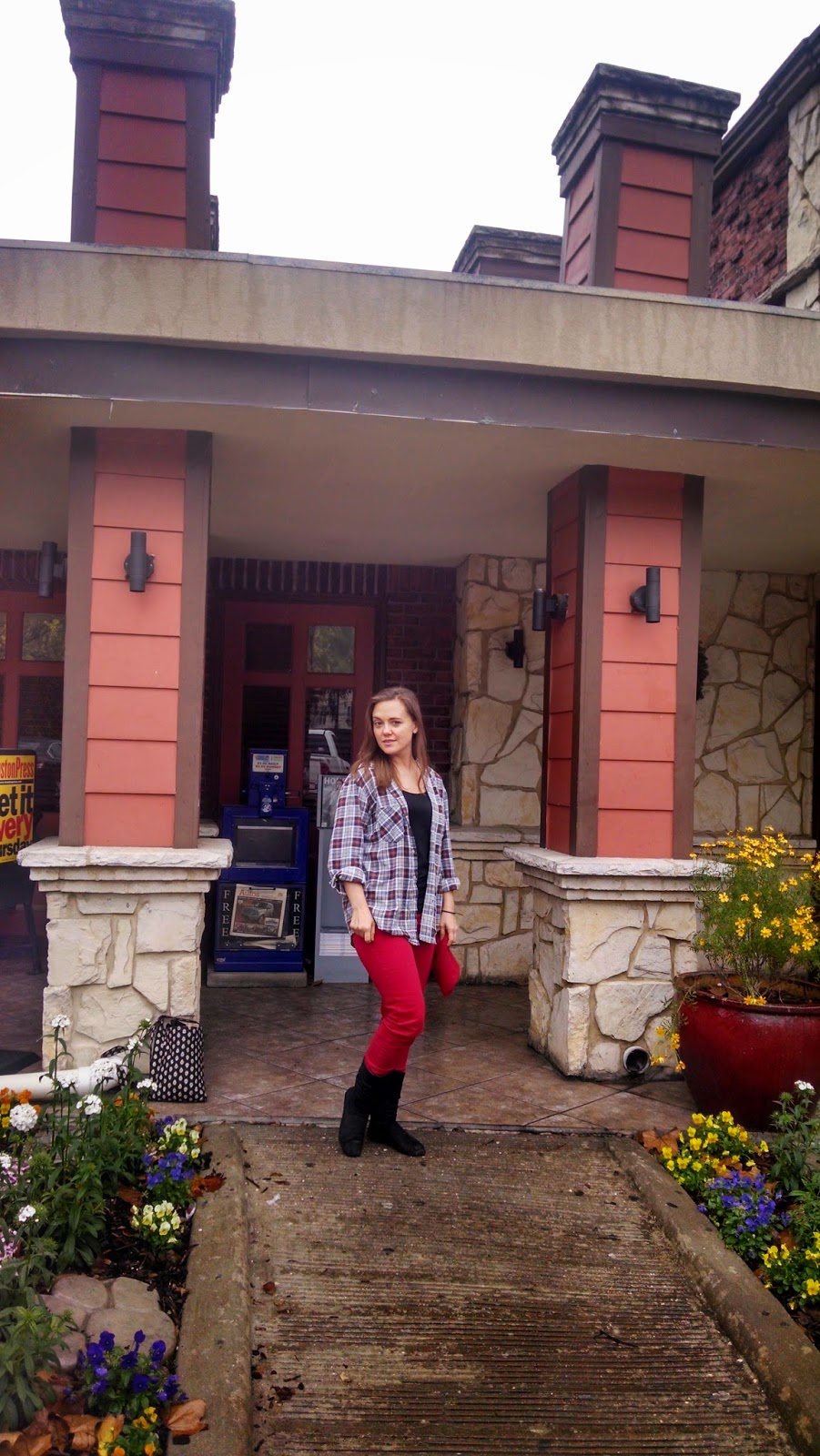 Gotta save the batteries for full length, outside of cafe photo.

Ski hat: I have no idea, it was probably my dad's.
Flannel: Had it since I was 12 (which means it is 21 years old!)
Black Cami: Do you love it? I love it. I got it at Ross.
Red Jeans: Macy's, man.
Black boots: A cheap shoe store in a run down mall.
Makeup: Whatever I couldn't wipe off from New Year's Eve. But if someone asked I could call it "Remnants" and make it sound better.

Hope your New Year is off to a great start. I intend to do some brainstorming and intentionally take some time to write some poetry or an essay next. Come back now, you hear?

Posted by EmilysWindowSeat at 11:02 AM No comments: