When Your Mother Heart Cries

Well, baby boy number 2 has finally arrived and is at home with me now and is almost always in my arms. But before I could bring him to the place where he belongs I had to leave him in a place that he did not.

After hours of labor four years ago, I brought my first son into this world. They placed him in my arms almost immediately and he stayed there until they wrapped him up so that he could join my husband and me in my room. He stayed there with us until it was time for me to go home, we placed him in his carseat and he has been with us ever since.

3 weeks ago I labored  for hours but had an easier birth. I brought my second son into this world except that he didn't get placed into my arms right away. I looked around and waited expectantly, my husband says euphorically. They told me to hold on while they cleaned him up and then I heard low voices. They let me hold him for a minute and then took him away again. I was disappointed but knew that soon he would be where he belonged. Then they told me that he was breathing rapidly and that he would need to go into the NICU. I wanted to know what they meant and how long but they didn't know how long, they couldn't say. I couldn't process the fact that they were taking him from me, my labor had gone so well and this wasn't supposed to happen. I asked them if I could hold him and if his big brother could see him. They hesitated slightly and then said that we could. So, I held him and Elijah touched him and smiled and said: "I love my baby." But just for a minute and he was taken away from me.

Each day I was in the hospital I hoped that they would bring him to me but as the hours passed I began to realize that even bringing him home when I was discharged could very well be an impossibility. I went to visit him every three hours to try and get him to nurse. At some point my legs got very swollen and the nurse in the NICU did not realize that I was walking up to the room every three hours and not being wheeled up. She told me that the next time I needed to be wheeled up there and that I needed to rest. I took her advice because I felt as if my legs were going to give out. I wanted to make sure I was there with my baby. 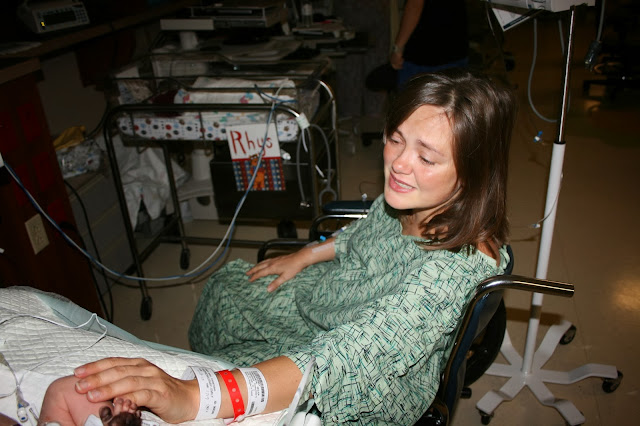 The longer I stayed the more I could look around instead of staring intensely at my new one. I heard one mother singing to her child: "Just put your mind to it, you can do it" and in a soft mother voice that small rhyme made me cry. How long had she been there? What was her baby going through? Mine had only been there three days and seeing him with so many wires on his small body, knowing he had to stay there, that I had to leave him there, was torture.

When I was "discharged" from the hospital on Thursday night my heart felt like it was breaking. We would only be 15 minutes away and we were coming back in 6 hours. We left at 11:59 the minute before it turned to Friday and came back at 6AM.  Around 5PM the next day the nurse in charge of him said that he was going to be able to come home with us that night. I was so happy I didn't know what to do with myself. Finally after paperwork and instructions they wheeled us out of the NICU. My happiness did not dissipate but I started to feel a weight on my heart as I became aware of every other mother that was in there, still by her baby's bed, looking at me taking my lovely one home. And I started to cry. I had cried so much that week: not being able to hold him, not having him with me, seeing him breathing rapidly and wondering what that meant for him. But now I was crying for all the mothers that saw me take him home after only four days.

And now my blessing is home where he belongs. I cry for happiness that he is here and in my head "Put your mind to it, you can do it" still plays in my head and I think of all the mothers and yearn for them to have their babies home too.
Posted by EmilysWindowSeat at 7:18 PM No comments: