I am reading a book about women in World War II and have found it very interesting even though I am only in the second chapter. One of the books major premises is that standards for women are changed during war.
War created circumstances that allowed women to do things that were against social norms-even encouraged them to do things against the social norm. 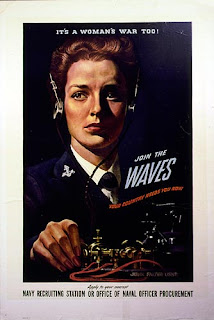 Even though it was often taken away after the war was over, women's role had been stretched and would never completely fit back into the shape it had been. War was an oxymoron for the women of those days-sad, but liberating- they longed for their sweethearts return but they had a chance to show the world that they are beyond capable.
That books like these have to come out for many to know what women did during the fight is sad. Some people in the forties did not even realize what fronts women were on because they were never reported in the newspaper as being there. It is recorded that the Army nurses were there right along with the men. The nurses suffered the same kind of malnutrition and gunfire as the soldiers. In fact, when the government realized that nurses who were in the same zones as soldiers might need to know something about war, they created a program to train them for it. In training, they had to learn to crawl on their stomachs through mud while a live machine gun was being fired, make stretchers out of coveralls and bedpans out of newspaper. They took 30 mile hikes with a thirty-pound backpack and a four pound helmet to prepare them physically. While on the battlefield all of these things came in handy. It didn't always prepare them for digging foxholes, caring for men with their faces blown off, sleeping in mud, or giving their own blood to the soldiers who needed it. But they did it.
They kept going in spite of their own injuries, one nurse hurt her back and kept serving, eventually severing her spinal cord because she had to make a jump out of a plane with a fifty pound pack.
After sleeping in the mud, carrying heavy backpacks, jumping out of planes, struggling with lifeboats while enemy submarines roamed the waters, and eating rats and frogs when rations ran out they got to go home to ads like this one: 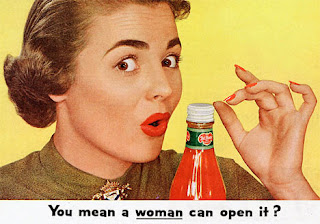 Posted by EmilysWindowSeat at 7:09 AM No comments: