Look At The Stars

My life runs into different shades of
The same color
No distinction
I look at the stars
And their glory
And my own muted colors
Against them
And I sigh
To be up there
Gazed at
Admired
Studied
Each human
Desires public adoration
Importance.
Chests heave deep sighs
Reverberating throughout the world
In response to life.
But where would the stars be
If no one to admire them?

One of the biggest challenges for me in both decorating and fashion is that I always have a specific idea before I began looking for something. If it is fashion, I have an idea of the outfit in my head and shopping is just searching for that outfit. Usually I don't find what I am looking for.
When it comes to decorating I usually see the room in my head. The problem, again, is finding all those things that are in my head because I have never seen them before (except for in my head).
So, I try to make what I can. I have a very specific idea for the room we use as the library in our house. One part of that idea was a very specific rug and it was not something I thought I could make on my own. I searched the internet and stores for the rug I wanted. The picture I had in my head was an owl sitting in a tree reading a book. I found owl rugs and sometimes owls in trees but never owls with books in trees.
I began typing "custom rugs" and "design your own rug" into Google. I found that "custom" and "design your own" just meant picking out the shape, size, and color of the rugs. One other website that appeared was for businesses looking to put their logo on a rug. They didn't have any information about what was required to prove you were a business, they just had a place to e-mail your logo.
I decided to enlist my brother, Joseph, to help me create a digital piece of art to send them. My job was to translate to Joseph what was in my head so that he could draw it. After we created it, I sent it to the company as my "logo", they translated it to the colors that they had available and then they quoted me a price. They never asked me to prove I was a business and they only required you to buy one rug. So below is the picture of my truly custom rug. Also, below I included a link to my brother Joseph's website. I enlisted him for a reason. He has designed quite a few shirts for camps and missions trips, etc. But the website below is for his handcrafted jewelry. Check it out! 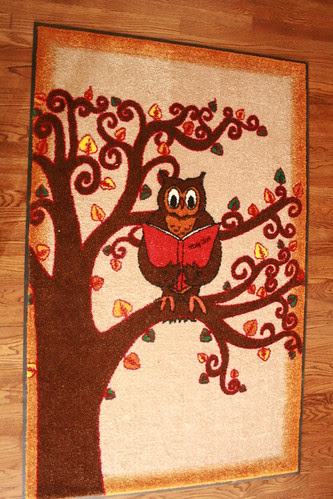 IMG_1609, a photo by EmilyWindowSeat on Flickr.
Posted by EmilysWindowSeat at 5:55 PM No comments:

I found this door at an antique store. I scored it by talking to the owner of the booth and telling her about my project. She was using it to display other items so it had a lot of nails in it but I got it for the price I had set in my head ($20). 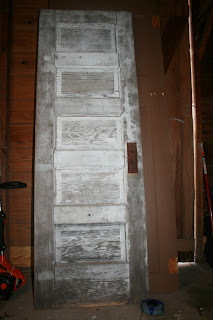 The door had a lot of nails in it and the hinges were a bad sort of rusty so I had to pry the nails out and unscrew the hinges. Then I took care to putty all the holes. Then I sanded it with an orbital sander and by hand. 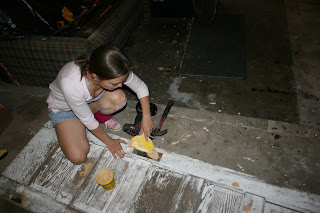 The next step before was to cut the door to make it symmetrical. 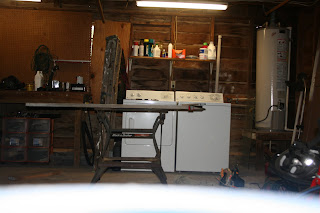 Then I sanded it with a finer grit before painting it. For some reason I don't have a picture of it after I painted it white. But it took 4 coats to sufficiently cover it.

After I painted it white, I taped the five panels around the edges with painter's tape. Then I painted two panels on each side dark brown. I traced an outline of two birds in the middle panel and let it dry. 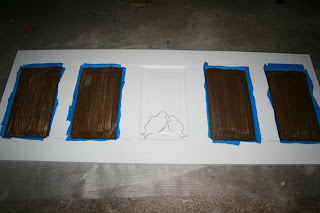 Then I painted around the outline. It took 3 coats total. I also did not get a picture of the back, but I used picture hanging kit. Attaching two d-rings to the back and looping wire to each one. Then I screwed a hook into the wall to hang it up. Here it is: 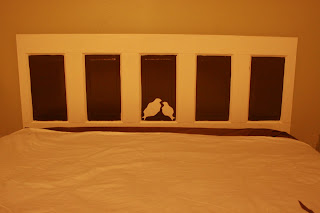 Posted by EmilysWindowSeat at 1:03 PM 2 comments:

Email ThisBlogThis!Share to TwitterShare to FacebookShare to Pinterest
Labels: CREATIVITY, Creativity-Art/Handy/Crafty, How To, Upcycle

I typed out something that would be of no help to anyone if I posted it. Therefore, it won't be posted and this is the post for today. Maybe it will be turned into a poem or short story and the ambiguity I can hide behind in those forms.
Posted by EmilysWindowSeat at 8:53 PM No comments:

Hopefully by the end of this week I am going to post of blog (with pictures) of how I made a headboard out of an antique door. Look for it!
Posted by EmilysWindowSeat at 7:31 PM No comments:

Email ThisBlogThis!Share to TwitterShare to FacebookShare to Pinterest
Labels: CREATIVITY, Creativity-Art/Handy/Crafty, How To

This poem is a story. In my mind I can see the events that lead up to this moment, but I don't want to tell them because I want whoever reads this to have their own story. It is about deception and the way others react and feel when they realize they have been deceived (especially as a mass).

It was the seventh day
That is, the seventh of May
And he would hang
On the gallows.
He had beguiled us
Reviled us
And we felt distaste sting
In our mouth.
Though his words
Had been smoke
We had believed
This fable-full man.
Our vanity
Our vanity
No elixir
For that disease.
The solution?
Let his au jus
Run down the
Wooden platform
And pay for
His sulfur sins.

-Emily Chumchal Andrews
Posted by EmilysWindowSeat at 5:59 PM No comments:

I think my Creative Writing professor wanted to read this poem and find something reminiscent of Sylvia Plath's "Daddy" poem. This was the first poem I turned in (the one below is the edited and re-written version) but she wrote that the poem was like a Hallmark Card. You may think means that she liked it. In fact, that is an insult in the creative writing world. I think it also led to her having a preconceived idea about me the whole semester. She was surprised when I turned out some things and answered certain questions. Her tone said "Emily? That must have been pure luck!" I had never actually had a professor think this way of me. Usually in every class from Brit Lit to English 2, History, Sociology, Government, even Algebra I had my work held up as an example. It could be embarrassing, but if was also affirming. So, I worked hard in Creative Writing (and all the other classes too, hard work got the "A's") and I think it paid off in my writing. It still wasn't what she wanted, which I think was what fell within what was popular in Creative Writing at the time(there should not be trends in Creative writing!) But she did like a couple of lines (which happened to be some of my favorite)and I have kept those in this version of the poem.

Your green eyes laugh
For your number one girl
And she wants to be like you,
Spitting sunflower seeds
Like a machine gun
In her best daddy fashion.

I put my soft child hand
Into your rough and hard-worked ones
And trust that life is certain.
I'll wrestle your muscled arm down
White where the sun has not browned
You. And I'll keep you there forever.

We played the "get-away-game"*
You holding me tight,
I would loosen your grip
Trying to see who was strongest
You always won, but our delighted fun
Was that I could never really get away.

*The Get-Away-Game is an actual game that my dad and brother and I made up. The object was to "get away" from my dad. We had to be able to unloose his hands and legs and run away. He would hold us by his legs, we would wriggle out, think we were home free and he would grab us by the ankles. Or unhinge his hands and then get caught between his legs and so on.
Posted by EmilysWindowSeat at 10:13 PM No comments:

I find that at times I wish I had the confidence in life, love, and myself that I had at ten years old:

Knocking the wood down
With my ball
Gathering up spit
Standing there tall.
The first woman pitcher
That was me
Nolan Ryan style
Just wait and see.
Practicing and sweating
In the sun
Determined and smiling
And having fun.
I was so sure of myself
And I was ten
And what I'd give
To be so certain again.

-Emily Chumchal Andrews
Posted by EmilysWindowSeat at 10:15 AM No comments:

I have decided to post my poetry and short stories on my blog. I intended to do this when I started the blog and then I begin to read about selling the written word. To post something on a blog means that it is considered "published." Therefore, your work is not as valuable as it was before posting.

Now I have come to the conclusion that it may not be valuable just sitting in my closet either. Also, it hinders me from writing anything new. If I publish it here, I am required to write more. Better to share some of me with the world.

Perhaps I was making excuses because I was afraid to share myself, I don't know. I do know I legitimately want to make a mark on this world. I feel as if my life can be summed up like this: I am a dreamer, but practical. Therefore if I do not know how to being, I don't start. If I start I put my all in. So, I live a safe life but not always a happy one. I don't know how to start with getting my writing read. There is so much to read on the internet why will someone read mine? I don't know, but I am putting it out there for all who do.
Posted by EmilysWindowSeat at 10:56 PM No comments:

The challenge I gave myself was to craft a poem with the alphabet. First line starts with A.