Back In the Day I Was All That and a Bag of Chips. Boo Ya!

SPOILER ALERT: There are pictures at the end!

I definitely wasn't all that and a bag of chips but I just HAD to use three terms from "back in the day" in my title. There were so many more I could have used. Like "what up, G"?" and "duh" or, better yet, "doy." Where did that one come from anyway?
I have definitely been on a 1990's kick lately and it might be because I am nearing 30. And, also, as I mentioned in a previous blog, people a decade younger or so don't know what I am talking about OR they don't realize we didn't have something they have now.
I have a story from just last week that is the perfect example, actually. My husband was telling a story about a homeless magician guy that did a card trick for him in a restaurant (this was about ten years ago). My husband was with some friends and the guy came up to Bobby and had him pick a card from an invisible deck, the guy walked out of the restaurant and didn't come back for a good ten minutes. Meanwhile, Bobby told his friends what the card was but they didn't leave the table during that time and the guy was not even inside the restaurant. The man comes back and pulls out the card Bobby was thinking of! Well, the boy he was telling this story to (who is about fifteen) says "maybe your friends texted him." Bobby and I looked at each other and we both realized the same thing, there was no such thing as texting then! It was funny. It just makes me think about the 90's and what was different then. It's late and I know I will leave out a ton of things but here is what comes to mind:

TV:
Fresh Prince
Family Matters
Full House
My So-called Life
Silver Spoons
Duck Tales
Tale Spin
Darkwing Duck
Tiny Toons
Rescue Rangers
Step by Step
Growing Pains
Family Ties
What was that one with girl that was a robot?
Which reminds me...ALF (he got on my nerves, though)
Too many shows

Toys:
Pogo ball
Pogs
Nintendo (just nintendo, no super, no whatever came after that...)

Slang or Lines:
Duh
Doy
Talk to the hand
Whatever!
Loser
Boo ya!
Aiight
Crunk
Don't even go there!
Jacked up
Oh snap
Score
Sweeet
Stylin'
Tight
Bra (as in, "bro" or "brother")


I really do have on a fanny pack "Shoot, I know you just di-nt" 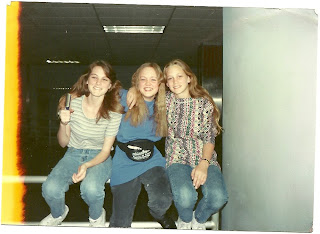 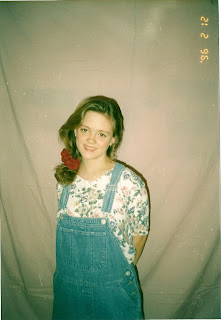 The grunge look, I loved hats...and does my hair look gold? Yeah, I dyed it with peroxide. 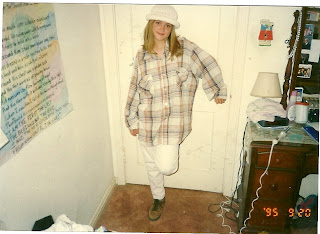 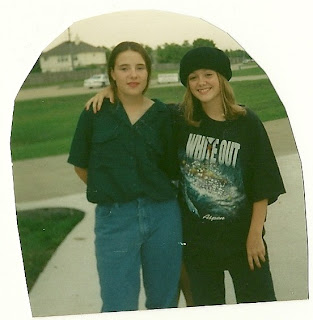 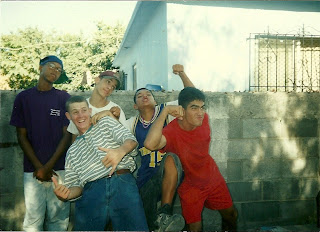 Posted by EmilysWindowSeat at 1:50 AM