My husband is a school teacher and so we have made our way into conversation many times about the culture of cool. How parents really feel the need to push their kids into popularity or let them slide into it or even how adults who were never cool take their opportunity when they have children. Either way there is an obsession that we do not want our children to be a part of.

I have to admit I checked out a book from the library recently that I knew would jive with what I already believe about parenting. Sometimes you just need someone to encourage you along the way even if it is an author you have never met. I was in the parenting section because it is right next to the kids section and I had already selected books about trees and the sun and moon for my son. So, while he played, I skimmed the titles. I came across one that caught my interest "Bringing up Geeks: How to Protect Your Kid's Childhood in a Grow-Up-Too-Fast World."

I think my parents brought me and my 3 siblings up as geeks and for that I am truly thankful. I am looking forward to raising my two boys as geeks also. I am also a little intimidated. It is not going to be an easy task. This culture really is obsessed with "cool" it is all around and more accessible than ever. But what is that true cliche? Nothing worth having comes easy.

People will scoff and say: "Let's see about that in a few years" but below I have listed those things that are very important to me as I raise my boys.

1) Looking people in the eye when they are talking to you.

This is about more than eye contact. This is about respect. Also in this world of cell phones and technology it is about being able to put it down for awhile and focus on a real person in front of you. Yes, something that bothers me very much.

My son was given a Leap Pad last year for Christmas and he was only 3 years old. I was at least in Elementary School before I ever played a video game and I certainly did not have my own device to play it on. I have already had to learn how to limit technology and already had to have conversations about those limitations with him and people he visits with. I was hoping for at least a couple of years before I had to do this, but I have realized it is only going to get more difficult and it is one I am steeling myself for.

Right now he is allowed 25 minutes of play time on his Leap Pad every other day. He must earn watching a half hour of TV by accumulating 10 stickers on his "helping" chart. Or he may watch television with his dad on the weekend which usually consists of two Alton Brown "Good Eats" a really informative cooking show.

No Calliou (whiny!). No Sponge Bob (ridiculous, questionable). No Word Girl (disrespectful!).  I don't even approve every Disney or Pixar movie. Brave. No. Not for a four year old. Toy Story and Cars. Yes.

I actually notice a real difference in my oldest son's attitude when he plays outside more. Too many kids are at a loss when they get outside. He can play in his sandbox for three hours straight. Sand is not fun to clean up but I would rather that over him staying inside. 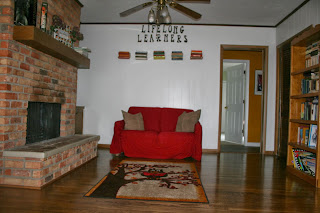 Sure I want him to get good grades which equals a good college which equals a good job but more than that I want him to love learning. If he doesn't get a good grade but he worked hard I am happy. I want to help him find things he is interested in and pursue knowledge. I want him to be curious about how things work and why things are the way they are. I want him to be able to find information for himself. To explore. To love life and to be amazed at what surrounds him. I want life to be an adventure. I hate the purposefully cool "bored" attitude. Learn something. I want him to be child that is not afraid to be enthusiatic. Even writing that seems ridiculous but it isn't. When you are enthusiastic about things people laugh at you. But I don't want him to care about that. Which brings me to my next point:

Most parents would say that they want their child to be honest, upright, generous, etc. but I think one problem people have in this world right now is DEFINING those words. Everything is so relative now. The thing is that character really is not relative. Morality is not relative. But when a person cannot define what is moral they obviously cannot teach someone to live morally. Some things are right and some things are wrong. Some people will laugh at you, some people will stop being your friend when you stand up for those things. Tough. Living an honorable life is more important than people who cannot respect that.

When I am in line, an especially long line, I find talking with the person before me or the person behind me makes the line seem so much shorter, but I have also found that some people are engaged to their phone ( do I mean "with"?) or that they are not friendly. Many really enjoy the distraction too  after their initial surprise. I hope my sons can engage in friendly conversation. There is so much to learn from others. So much benefit that will never be garnered from their phone and the internet.

Sports for children have become a BIG deal and with it another way to showcase your children or to live out your own fantasies- for them to be your living trophy. The thing is I want sports and competition to teach my child more than how to win. I want them to learn how to cheer on others, how to be principled even if it means losing, how to lose gracefully. And also how to master (as well as they can) a new skill.

I want my kids to have a childhood. I don't want them to have shirts with wry phrases, I don't want them to dress in the latest trends, I don't want them to be savvy. I want them to have innocence and imagination. I want them to play.  I want them to know that romantic relationships can wait...for a long time. There is so much to explore, to know, to do. I have a pet peeve about "girlfriend" jokes. "Is that your little girlfriend?" or "Do you have a girlfriend yet?" Even his kisses to his friends that are girls are acts of friendship. I love his naivete about the world and their pettiness. They will not be allowed to have a television in their room or a computer in their room (or anything with internet capacity). Social media will be something they have to wait to do. Movies will still be screened. I won't know everything but because he is principled he will know right from wrong and, hopefully, make right choices.

Why do kids in this day and age dress like adults, talk like them, and yet have no idea how to sweep a floor, clean a room, do things for themselves? I want my kid to be a kid, dress like a kid, talk like a kid and know how to clean a room, do their homework, and stand up for themselves. I also want them to be able to take criticism from adults (whether warranted or not) and not rely on us to get them out of things they don't want to do.

Sometimes my boys will be forced to be at home even if they would rather be out with friends. We will have family down time, we will not always have to have an activity or be on the go. They will talk to us, to each other and we will have traditions and things that set us apart as a family. They will roll their eyes but secretly they will love it. They will defend each other and us and know that no matter where they are, who they are, what they do their family loves them and there is always a place for them here.

Like what you like. If you have read any of my other posts you also know that extends to the gender box.


I want to bring up a geek. I don't want them to be "cool." It took me awhile to figure out that I was a geek growing up. I was fun and pretty and smart but never included in the cool. I never understood until I realized that it wasn't so important and that I liked who I was and who my family was and that that was more important than being cool. That sounds a lot like confidence. Confidence will carry my boys further than cool will. Childhood and youth only last so long. Be a child. And when you grow up...well, I also read a book called "Geeks Will Inherit the Earth." Geek adults go far.

Posted by EmilysWindowSeat at 3:38 PM