In a few months my son is going to have a totally new experience thrust upon him, one that will change his life from all he has previously known. He will no longer be an only child, he will become a brother. It is funny to think that the son in my belly will never know what it is like to not be a brother, he will always be one.

In preparation for the birth of this new one I decided to buy my son a doll. I could show him how to hold it properly, push it in the stroller, change a diaper, and all sorts of things that will be useful for him to learn. He can learn to care for a small person, to be gentle, to nurture and this can be a great thing even if he were not going to have a baby brother soon.  We do not buy many toys for him so this was going to be a treat. He only gets one birthday gift and three Christmas gifts, maybe some crayons or a book during the year. There are many people who love to get him gifts, though, but none have bought him a doll, I imagine it hasn’t crossed their minds either. Why? Because he is a boy.

The fact that boys aren’t supposed to play with dolls was brought home clearly as I tried to find a doll for my son. I am not ignorant or naïve, I understood in the back of my mind that, largely, pink and dolls aren’t acceptable for boys in the collective mind of society, especially the Christian community (do I want to “make” him a homosexual?!) It is interesting and frustrating to me that teaching a boy how to nurture is not a top priority and is, in fact, something people are a little uncomfortable with or downright adverse to. It was also interesting and frustrating trying to find a doll for my son and encountering what I have heard dubbed the “pink” aisle.

My son is three years old and will be four shortly. I let him know that we were going to find a baby doll for him before we ever set out on the mission, he was excited and couldn’t wait to get his “baby.” I had already perused the internet and Toys R’ Us was the only place that seemed to have a somewhat life like male doll. So, we started there. When I got to the store I wasn’t sure where to look and asked an associate for help. He looked at me surprised and said that he didn’t think they had anything like that. I told him I had seen it online and so he went to ask a superior about it. She looked at me sort of quizzically, said they didn’t have anything like that and was also surprised when I said that I had seen it online.  They looked it up and I was escorted to an aisle that was inundated with pink and light purple.  In fact, the only other color was the one male doll dressed in blue. It was twice as much as all of the other dolls and hard, immovable plastic.  I didn’t know what to do, this was the ONLY doll that wasn’t dressed in pink or purple, but it wasn’t what I was looking for. Now, I have written a previous post about my son and how he likes pink. I’ve bought him a pink cup and he admires it along with all the other God given (to every gender) colors. However, my husband has a qualm with too much pink stuff. Not that he thinks that God only set that color aside for little girls but he believes that although we should encourage our son to be his own person we shouldn’t set him up for bullying. I respect my husband and so I conceded when we went to the store for socks and my son wanted pink socks. We settled for white.  My problem with the pink aisle is that making everything pink and purple signifies to everyone that “this toy is a girl’s toy.”

If making everything pink and purple was not enough to warn you away, this is what is written on the box that you buy the doll in: “Soft baby dolls to cuddle and exciting features dolls ready to nuture are all part of the fun in You & Me! Young girls will love taking care of their precious bundles while pretending to be a mommy or a caring friend” and Toysrus.com: “You & Me baby dolls, baby doll clothes, and accessories let girls be girls while pretending to be adults. You & Me baby dolls offer collectible and pretend play time dolls that reflect the personality of every girl.”  Beside the use of “girl” it is certainly untrue that only pink and purple dolls will “reflect the personality of every young girl.”

I want my son to be able to pretend to be a daddy or “caring friend” and I want it to be encouraged among society at large. I know this is a large order with all that has been ingrained in us, but I am only stating my wishes. At the least I would like for opinions to be left to the people who own them.  To me the pink aisle is not only a discouragement to little girls to branch out, to be strong, courageous, brave, and thinkers (in addition to nurturing) but it is a symbol of the lack of encouragement we give to young boys to be gentlemen and loving fathers in our society. We think we are breeding “men” but our definition seems to be grotesquely skewed.  I realize that seems to be a lot of emphasis placed on one small thing, but to me it symbolizes a lot and that is what I am getting at.

My son is still only three and he hasn’t quite internalized all of this yet. He saw a doll he liked, picked it up and placed it in a violet heart stroller, he happily pushed it around the aisle while I tried to make up my mind what to do. The associate came around to see if I had found it and marveled at my son’s gentleness with the baby.  After a little deliberation I decided to check out a few more stores, my son was disappointed that he wasn’t able to take “his” baby home. Needless to say ( well not needless) the other stores had so many dolls and great accessories but they were all in your choice of two colors-pink or purple.
With some dismay, I went back to Toys R’ Us and bought both the stroller and the doll my son had picked out. It wasn’t until a few nights ago that I managed to make some new clothes and new seat cover for the stroller. 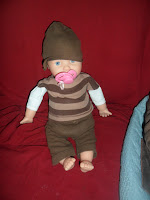 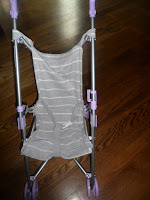 Tonight as we ate dinner my son told us that we needed to talk quietly because the baby was asleep. My amusement was replaced by a sweet feeling as he put his doll on the couch, grabbed a blanket from his bed and covered him up. I could hear him whispering quietly to the baby. He was letting him know that he didn’t have to be scared of bad dreams and he tucked him in “comfy and cozy”. 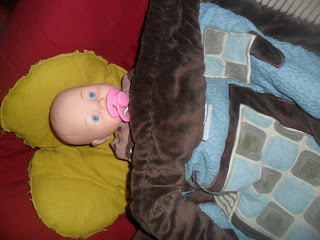 After dinner he spent a little snuggle time and gave his baby a few kisses before he was off to the park to hang out with daddy. 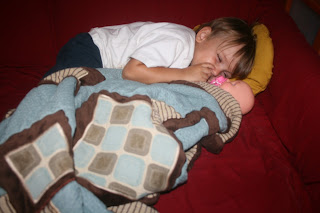 I want my son to be strong and courageous, to be brave and sure of himself. I want him to be a friend to the friendless, to have a heart for the poor and the weak, the lonely and the unloved-the old, the young, and children. I love that he plays in the dirt, makes towers and knocks them over, gets muddy, wrestles and races. I also love that he dances and signs, gives kisses, loves to cook, want to learn to sew, and tucks his baby dolls in for sweet dreams. I do not want those aspects to be teased out of him. I do not want that diluted manhood subtly hinted at and taken in by him. I am afraid because it is woven in and out and all around us.  Enough small things amount to something big-comments, looks, disapproval. Everyone from the stranger in the grocery store to his boyhood friends will help to prod him early on. My question is: “What are we actually teaching our boys both about themselves and women?” What value is it to extract things he loves and are of no harm-to suppress emotional expression, tenderness, gentleness and to promote a superior attitude and mindset? Strength and gentleness are not mutually exclusive- neither is logic and emotion.  If we all pondered this or believed it we could all accomplish greater things. There wouldn't be such a war between the sexes but a mutual respect for the abilities that each one has and what each one contributes.

I want my son to be a man who loves and honors God, his family, and his neighbor…strongly, gently, and unabashedly.

Posted by EmilysWindowSeat at 9:40 PM

I love this so much!