What I Wore to a Christmas Open Mic

The first picture doesn't really show the outfit but it is me at the mic reading a poem of mine. 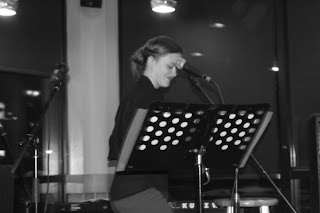 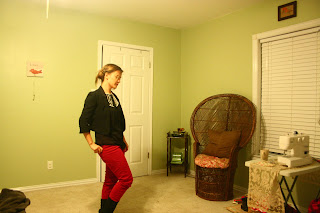 The blouse came from Karen's Closet a consignment store nearby. $5 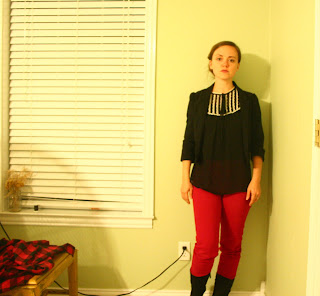 The red jeans have appeared in a recent post. I got them on sale at Macy's. Thought I might see what the red belt looked like with the outfit (got it at Goodwill $2). 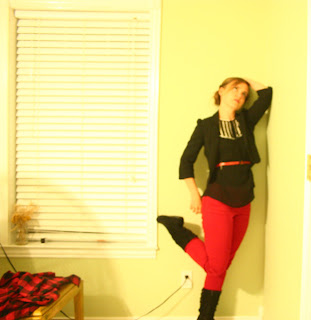 And the boots were bought 3 years ago. I found them at a cheap shoe store in the mall in the little girl's section. I cut off the extreme laces that were hanging off them and they are perfect now! 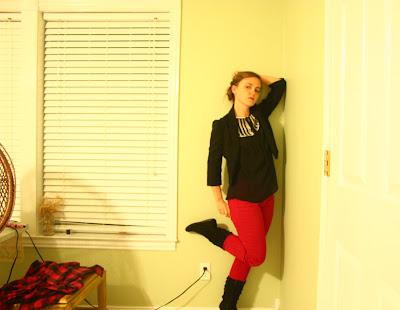 Posted by EmilysWindowSeat at 8:32 AM No comments: Links to this post

Email ThisBlogThis!Share to TwitterShare to FacebookShare to Pinterest
Labels: CREATIVITY, Creativity-What I Wore

Let the world have theirs
And I will have mine
And you are it
And we dance in time.

All we know is each other
And our bright bright eyes
And the fact that you are mine
And that we have no disguise.

That the world can hide
And go on being sad
But we don't miss it
They've been had.

We can just be each other's
In our castle made of dreams
When we enter this house
All is as it seems.

Home is where we are
Life is who we are
Happy is what we are.
When we are... together.


Posted by EmilysWindowSeat at 8:23 AM No comments: Links to this post

There is a certain time of year that I think about the death of a person who was very dear to me. In fact, I don't think I have yet had someone else die that was so very dear to me as him.

His name is Eugene Fowler but I called him "Pal." When my parents moved into the house that we grew up in they did not know that there would be not only a neighbour, in the best sense of the word, but a dear friend. Pal was in his 70's when my parents moved in and my mom was pregnant with me.

Pal had a garden, fed the birds, and mowed his own lawn. He worked on his car, he was amazing. When my parents brought me home he was the first person to hold me. I fed the birds with him, worked in his garden with him, and ate waffle breakfast with him. I named him "Pal" because he was my pal and I can still see myself sitting on the hood of his classic blue car mindlessly chipping off the paint and him saying "Now Peaches, don't do that." He called socks "stockings" and if he didn't like something I did he was not mad he was "cross."

I visited him most every day coming through the back screen door. I would pile all the pillows in his house on the couch and sit high like a queen in front of the Television. I sat far back because, as Pal told me, sitting as close as I tried would "ruin my eyes." He took the gate off of his fence just so that I and my siblings could come back and forth through his yard freely. I remember when someone new moved into his house and they put up a gate. It was a reminder that Pal indeed was gone. 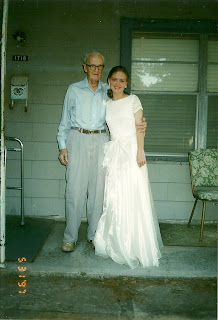 I climbed his trees and built forts in his yard. I drank his 7Up and ate all his peppermints (especially the chewy ones). I remember his yellow vintage stove and cobalt blue lamps, his living room always seemed so rich. I hid in his wooden side tables and prank called on his phone. He bandaged my cuts, I still remember the drawer that held the Neosporin and Band-Aids. My Pal. His birthday was this month and I suppose that is why I am thinking of him. He was born in 1905. He was dear to me and my family. I will always love you, Pal.
Posted by EmilysWindowSeat at 1:22 PM No comments: Links to this post