My friend, Natalie, and I are soon opening a new Etsy store and we have yet to come up with a name for it, but below is a sample of the items that will be available.
"Dirt is your friend." I think more than the words "adventure, confidence, strength" this embodies something I wish little girls were given to ponder and something I wish was demonstrated for them.
The dresses, dolls, and bibs are from recycled t-shirts because we want everything about the store to embody our values and envision them being passed down through the what we make. Resourcefulness, loving the earth God has given us, and enjoying sunshine, rain, words, music, the strength, wonder and beauty of our bodies. Enjoying food and laughing and dancing. Adventure, confidence, strength, getting messy. Hopefully, little girls will be encouraged in this way and one day they will grow up to be interesting, confident women.
If anyone has an idea for a name, leave it here. We will let you know when our store is open!
Cheers! 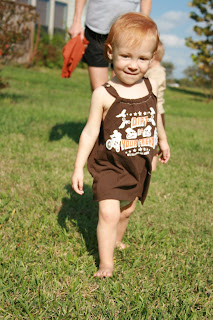 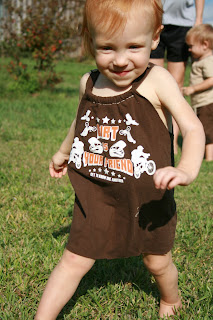 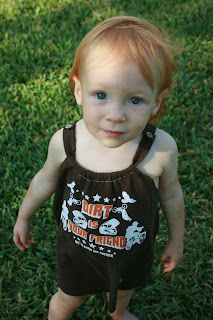 Posted by EmilysWindowSeat at 1:39 PM No comments: Links to this post

Sometimes I feel like the latter of these three. I listen so much that I don't think people take the time to see me and it is easier if I am already put somewhere neatly. Fortunately, this box and label is only in their brain and so I have the ability to be free physically and know who I am.

But it is frustrating to be something else in someone's mind because everything you say, whether it fits within that box or not, is stuffed in there and made to fit. Here's my box . And I sit in it. Tap the top  and the bottom  and the sides. Labeled "Sweet, Naive, Cute." And now I am In your Neat Little Box.

You don't need to look at me anymore. I am on a shelf  and Jack can pop up from the box and nod his head from the release. You just want agreement. Silent nodding. And you can make me what you want me to be. "Hi Jack! Do you believe the world is flat?" And once you get my nod, you push me back under.

See and I Have to Name This Post: Spotify

Do you sweat over titling your photo albums online? I love naming things and so if I can't find the perfect thing to say I don't want to publish it. I have, but I don't like it. What started this thought? I have to name playlists in Spotify, my newest social media interest. I named one that I didn't make public called: "Songs I Should Be Ashamed To Be Listening To." Let's just say the album includes "Whip My Hair" by Willow Smith and that is the only freebie you are getting today.

I have enjoyed naming things since I was young, one of my favorite parts about imaginary play was making up a name for myself. When writing a story, the sound and meaning of the name had to fit the character perfectly. I loved Anne Shirley because she loved naming things. She called a road that she traveled frequently "The White Way of Delight." If you don't know who the fictional literary character Anne Shirley is, then shame on you or whoever never introduced you to her!

Are you ever interested in a person you never met? Or have never seen? What I mean by this is that I walk by some people's houses and they seem to be bursting with character. I wonder who lives inside them. I want to meet them. I have considered knocking on their door with that sole purpose, just to meet them. I have also seen people and the way they dress, their eyes seem to tell me that they have a lot to add to this world and I want to talk to them and let them add to me. If they are beside me, sometimes I will talk to them, but mostly they just are in passing and I know they have so many stories. Sometimes I feel sad for people and I don't know why. I imagine what must be going on, mostly they are people I see while driving or riding in a car, so there is no way to gift them with a smile or word.

Speaking of that, I like to be left alone when I am angry, even when I am sad. I don't want happiness around me, I don't want sympathy. In fact sometimes I think I want people to be mean to me then. I like to exercise when I am angry or sad. I don't mean that it is easy to start but I mean that I like the result. I am inevitably more clearheaded and mature by the end. I wear myself out doing something useful instead of expending my energy on words or actions that will get me nowhere.

People are interesting creatures. I wish that interesting ones felt more free to express themselves in words. But maybe that is why they are interesting, they know when to speak. No, NO. They should speak sometimes and don't get a chance. It is generally the uninteresting that are the loudest. I don't mean expressive, I just mean the ones who feel they can say whatever they please and it is never edifying, it is never constructive, or smart. It is only loud and frequent.
Posted by EmilysWindowSeat at 10:29 AM No comments: Links to this post

Email ThisBlogThis!Share to TwitterShare to FacebookShare to Pinterest
Labels: My Ponderings, WRITING, Writing-Thoughts

When making a speech, do not begin stories with lines like "I was ironing my shirt this morning and..." because then the only thing people will be paying attention to is how many wrinkles you have in your shirt and the only thing they will be pondering is whether you are good at ironing or not.

In a play you have to remember that what the audience is seeing are the most joyous or the most heartbreaking moments in a person's life. It doesn't matter if the person is doing something as mundane as eating cereal in a scene, eventually their heart will be full or broken.

In a play, and often in life, the only things worth fighting for are love and recognition. When you are acting you must have an end goal as a character and you must be fighting for something and it will be, in one form or another, for love or recognition. This is so interesting.

Map out a character's goal and actions and then throw it away and only know your goal. That is what we do in life. We only know our goal, perhaps we map out a few actions but Life doesn't usually follow the script we would like. You change your actions to meet your goal. The same with acting, just listen and respond after you have examined your goal.

It seems to me that we must all know all feelings. Although we have not experienced all of life's setbacks or joys, we have the ability to know and rejoice or cry with the characters. We, perhaps, cannot know it fully, only dimly, but we know it.
Posted by EmilysWindowSeat at 3:17 PM 1 comment: Links to this post